How to Get Rid of Mould

Mould is an issue that plagues multitudes of houses, affecting not just old homes but even new builds. If untreated, mould can have detrimental effects not just on the structure but also for the health of those living in the building. Luckily, there are many ways to prevent the growth and recurrence of mould.

Mould tends to grow in places with lots of moisture including areas of damp, leakages, windows, pipes or flood sites. Typically, mould grows easily on materials such as paper, cardboard, wood and tiles. In addition, mould can grow on paint, wallpaper, drywall, carpets, fabric, upholstery and even dust. This makes houses a prime target for the growth of mould.

How To Prevent Mould

In order to prevent the build up of mould in the first place, there are certain actions which can be taken. Most of these revolve around minimising the amount of moisture in the area, ensuring good air circulation, and reducing heat and humidity.

Top Ways of Preventing Mould Include:

Fresh air circulation - improving the airflow in your home is an easy way to reduce the risk of mould. This involves opening cupboard doors more frequently to allow air circulation. Additionally, keeping furniture separate from the walls provides better ventilation. As much as possible, try to open windows.

Drying wet areas and wet materials - wet materials are a hotbed for mould growth and mould can grow in just two days. For this reason, it is best to dry any wet materials as soon as possible. You should always dry items before storing them.

How Do You Know If Your House Has Mould?

Mould in the home is usually easily detectable from its appearance. However, some mould growths could be mistaken for surface dirt. You can do a quick test for mould by dipping a swab in diluted bleach before dabbing it on the wall surface. If the spot becomes lighter and keeps coming back, you can assume that it is mould.

There are also mould test kits although reports prove that these may not be the most reliable option. 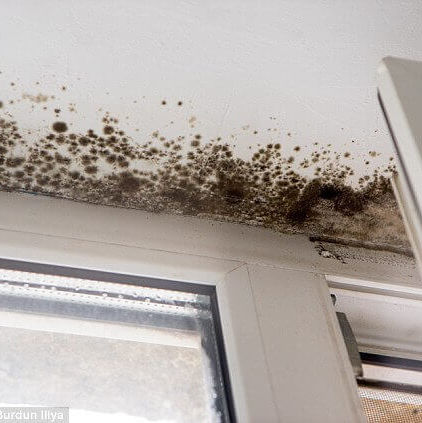 Mould can damage the property you live in and also affect the health of people living there. But preventing wet areas and reducing humidity levels can make a big difference

How To Stop Recurrence of Mould

Not only is it important to get rid of mould one it appears, you should also take care to stop the mould from coming back. There are plenty of simple ways you can do this.

Proper ventilation - just as a well-ventilated house helps avoid initial build up of mould, it also prevents it from coming back. Making sure to open windows and doors as much as possible will allow for better air circulation in the house.

Avoid steam - steam going off in the house can facilitate the recurrence of mould. The kitchen is a prime location for this so it is important to make sure that any boiling saucepans and kettles are not left to over-steam. Additionally, it is recommended to keep a window open or fan on when cooking. The same applies for build-up of steam in the bathroom - if possible,windows should be kept open during and after showering.

Temperature control - your home should not be too humid, yet nor should it be left too cold as this allows for condensation to form on the walls. Experts recommend an optimum temperature of 15 degrees celsius including leaving the house heated at this temperature even when you are out.

Keep materials clean - fabrics and materials are a known location for the build up and recurrence of mould. Keeping fabrics clean (especially in areas of high moisture like a shower curtain) will help the mould from rearing its ugly head once more.

Anti-mould paint - after removing mould, you should paint your home with anti-mould and anti-condensation paint to prevent the mould from returning.

Home Remedies to Get Rid of Mould

There are certain home remedies that people swear by in order to get rid of mould without the use of toxic substances. Of course, this will depend on the size and severity of the mould.

Many people rely on white vinegar in order to kill mould. The acidity of the white vinegar works well at cleaning, disinfecting and deodorising any bacteria. It is thought to kill up to 82% of mould species including black mould, a known allergen. White vinegar can be used on both porous and non-porous surfaces and is safe to use on the majority of surfaces around the home.

Another way to get rid of mould is by using bleach. Due to the strength of the bleach, you need only use one part bleach per four parts water. This, paired with a damp cloth, should be enough to gently remove the mould.

For the removal of black mould, experts recommend mixing two parts baking soda with one part white vinegar and one part water. This mixture should be stirred until it is a thick paste and then spread on the problem area. Allow the mixture to dry on the surface before scrubbing it away and wiping down with water.

Should I Remove Mould Myself?

Usually, you are able to remove house mould yourself with cleaning products or home remedies. However, it will depend on the severity of the issue and how sensitive you are to the mould. In some cases, mould has the potential to make you feel sick and those with allergies or asthma tend to be the most susceptible.

In general, you should take care when cleaning mould as exposure can irritate the skin, eyes, nose, throat and respiratory system.

How Do Professionals Remove Mould?

Mould professionals use strong antimicrobial chemicals in order to tackle the mould problem. Following the mould removal, they typically use a sealant in order to make the treated areas more resistant to water damage, condensation and mould build up.

Can I Live In A House With Mould?

All indoor environments have mould spores but often these are not toxic and people can comfortably live in these homes. Although there are over 100 different kinds of indoor moulds that are harmful to humans, very few of these are typically found in homes. However, if you have a mould problem and excess mould in the home, this could be problematic to your health.

There are certain known dangers to living in a house with mould. The Centers for Disease Control & Prevention flag those with asthma or allergies as the most at risk party. In general, living with mould can cause respiratory tract problems such as coughing, wheezing and a swollen throat.

People with mould sensitivity could experience nasal congestion, sneezing and a runny nose. It is also possible to develop mould poisoning which will also affect the nose and the throat as well as causing itchy, watery eyes and dry, scaly skin.

Longer exposure to mould, and especially black mould, can lead to fever, nausea and shortness of breath. If you detect mould and are feeling sick, the mould should be removed as soon as possible.